Ownership of a car example

There is a smart contact with the balance of $35k worth of ETH, just enough to purchase basic model of latest Tesla.

Tesla, as a forward thinking company allows payments in Etherium.

The default reality and legal standards are usually a couple of years behind the innovation.

But there are many hackers out there.

Mr. Hacker is not the owner.

So the Tesla Fractional Ownership Rental & Sons representative calls the Police and does what?

A great article by Jimmy Song 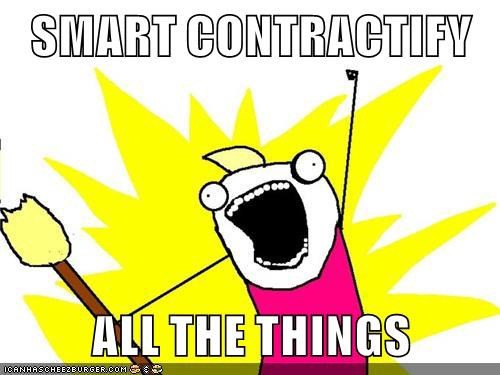 The Truth about Smart Contracts

Much like the words “blockchain”, “AI” and “cloud”, “smart contract” is one of those phrases that get a lot of hype.

For example, the house could be represented as a non-fungible token on Ethereum. Alice could transfer the house to Bob in an atomic swap for some amount of ETH. Here’s the problem. Bob needs to trust that the token actually represents the house. There has to be some Oracle that ensures the transfer of the house token to him actually means that the house is his legally.

So what do you think?

Are you aware of any judgments or real-life enforcements in the space?