Explaination of "Jump" and "Alpha" parameters

This post explains the parameter meanings of both “Jump” and “Alpha” for proposals in the Votes section of the forum.

Juror fee: The arbitration fees which are paid to jurors. If some jurors are considered ‘incoherent’, their arbitration fee is split between the other jurors.

(ex: JurorsForJump=100, there are currently 80 jurors, the first appeal does not lead to a jump, but on the second there are 161 jurors before the appeal so it leads to a jump).

Minimum Stake: The minimum amount of PNK required to stake into this court.

I think it’s a high number.

I don’t think there are that many PNK holders above minimum staking threshold.

I think that 255 is not realistic and excessive.

Well 255 in the general court would be 51 ETH of arbitration fees which seems high but reasonable.
Most people would stop appealing way before going there but it’s important for it to be high to defend against bribing attacks.

It would be nice to find this part in the Kleros documentation (in the court section for example: Court - Kleros), especially for those who are not familiar with Kleros.

Another point, the name of the alpha variable is wrong because it’s generic and not explicit. Something like partOfLoseStake seems better.

alpha is already in the code, cannot rename the variable just like that?

Yes but maybe for the v3…

maybe for the v3

Loads of people asking about v2, not released yet? 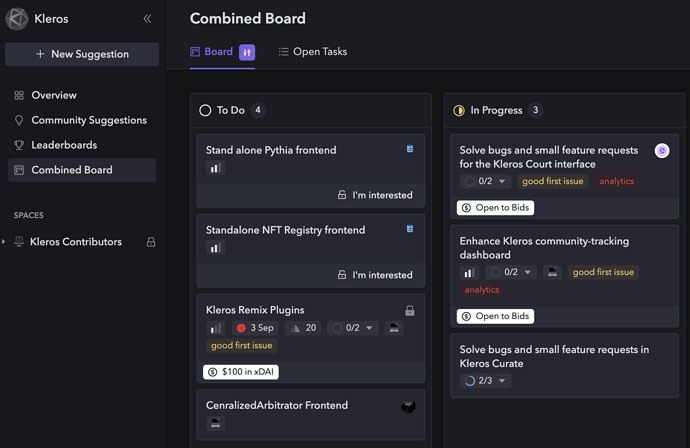 This is how it looks on my machine, right now. Maybe some permissions are required to view the board?

I genuinely think the board should be public - more work available means more incentive to join.

Empty board? Ghosttown. Why bother.

(jumping through some hops, logging in, connecting wallet, minting NFTs, it all takes some effort)

For my part it’s empty… indeed what is the point of not making it public?

There is a v2 project board in Github which is private at the moment.