Note that this proposal does not change the expected token allocation but mints tokens as a part of the token allocation plan (those tokens were always expected to be minted and are part of numbers displayed in both sale materials, we didn’t mint all from the start to avoid the cooperative controlling the supply and all sale materials in both sales were really explicit about the expected supply). The proposal does not propose to change token numbers but merely ask the Kleros DAO to validate part of the token emission schedule.
The cooperative does not have financial problems but in case the planned scheduled is not respected, it will have problems paying its expenses in PNK (PNK being used in reward programs, PNK part of team member compensation and OTC sales).
This proposal does not increase founder tokens. Founders have the same economic incentives as the rest of the community and Cooperative Kleros is not allowed to distribute dividends.
This proposal doesn’t propose to market sell tokens.
This proposal does not propose to extend the total supply to more than the 1B target set up in 2017 but is just a technical request to carry on the emission plan described in both token sales.

Most projects minted their entire supply at the beginning and only did one large round of token sale. However this model provided little community oversight to the large proportion of the tokens and funds allocated to a company/foundation. In 2017 we decided to go in a more transparent and responsible way. We did planed an expected number of 1B PNK (1,000,000,000 PNK) allocated as follows: 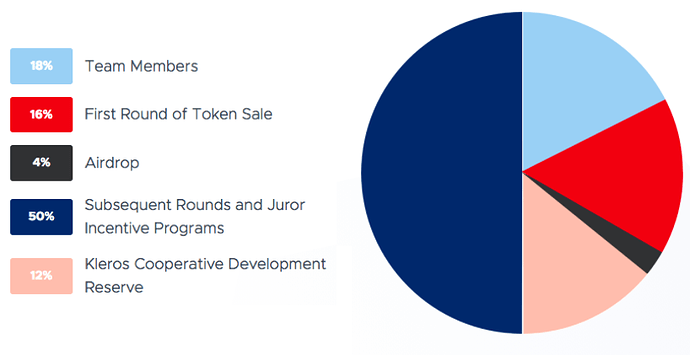 Extract of the first sale documents

The reason for not minting everything at the beginning was to avoid the cooperative from having full control over Kleros. Since PNK is used both for governance and for getting drawn as a juror, this would have resulted from the cooperative being able to pass any governance decisions and overrule all the other jurors.

In the early days, before the governance was available, we just minted PNK “as we go” when they were needed. Recently we did implement the Kleros governance and we are asking token holders to vote on any action which would involve the use the governor key. The governor key itself is also to be decentralized and replaced by the governance contract making Kleros fully decentralized. The governance contract is actually live in a non-enforcing version (since it is a critical piece of infrastructure and has control over all Kleros, we are letting it be non-enforcing for a few months with high bug bounties on it, before giving it control of the governance key).
The first minting proposal was made before the 2nd sale round.

As you know, we recently conducted our second sale round for 150,000,000 PNK (15% of expected supply) which took place January 20th - February 20th 2020 selling out with 12 days remaining. The full outline of our recent development and financial transparency report can be viewed here .

In addition to this, Cooperative Kleros won the “Programme d’Investissements d’Avenir” (Future Investment Program) by BPIFrance Financement. The prize consists of a total of €718,017, of which €478,678 are a non-refundable grant, and €239,339 are a refundable loan under the terms and conditions of the program.

Both these successes have allowed for a more comfortable runway and the ability to expand development, communications and research activities.

Basically, due to the success of our sale, OTC buyers (sold at market price see the token page ) and liquidity provided as part of the second sale objectives, we are edging closer to having zero PNK left in the reserve for the daily operations of the company.

So why do we need to execute a minting now?

As of 22/04/2020 the Cooperative Kleros PNK reserve currently sits at 1,136,450 PNK which is hampering our efforts to provide certain key aspects of daily operation.

For example, we are unable to:

Running out could hamper our efforts in both development, bug bounties and community building programs. Rewarding people who are building and participating in the Kleros ecosystem ensures that they can be jurors (thus get a good understanding of the system) and that they have aligned incentives in the success of Kleros.

This proposal just acts to validate a part of the PNK allocation scheduled planed in 2017 and displayed in all token sale documents since then.

Discussions at the proposal stage can be found here.

Why is there a request from minting?
Contrary to most projects who minted everything at the beginning (leading to the developing entity owning most of the supply), only a small proportion of the token allocations were initially minted letting the remaining be minted across time with governance votes.

Why do you need cash?
We don’t need generic cash, we need PNK which is a completely different need. It’s important for reward programs to be in PNK and for a part of team member compensation to be in PNK in order to align incentives.

Are you taking PNK for yourself?
Founders already got their PNK and this proposal would not increase the amount of PNK they’ll get.

Are those PNK gonna be dumped on the market?
No, they are not to be sold on the market but are to be used as part of reward programs, new team member compensation, liquidity and to accommodate large OTC sellers.

Is there an increase of the rate of PNK being spent?
With the successful sale, the team is expending, team members get the majority of their compensation labelled in $ and a smaller part in PNK. The spending of PNK stays almost constant as even if some team members are joining, the PNK price is higher so the effects more or less compensate.

Is there a conflict of interest?
No, this proposal does not increase the amount of PNK given to the founders. Founders have the same incentives as any PNK holders and if we make this proposal it is obviously that we believe it to be positive.

What will happen if the proposal is denied?
It is possible to make another one asking for a smaller amount to mint. If it is rejected too, reward programs would stop and we would have to negotiate with team member of change of their PNK part of compensation to fiat which would decrease their incentives to work well on Kleros.

Extract of the transparency report 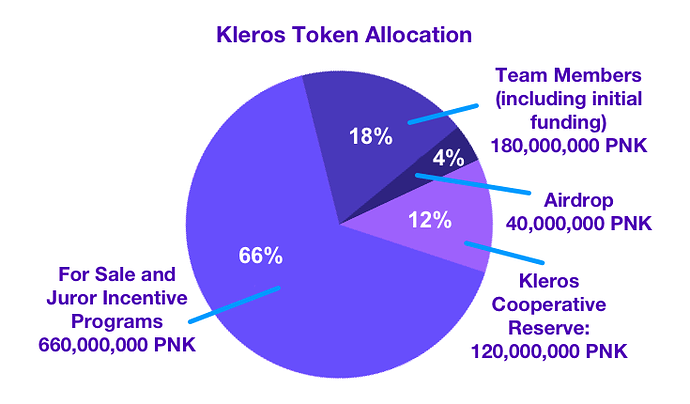 Founders and team members commit to work on the project for 3 years (from the time they started). While this amount is fully locked for the first year, after one year, they can claim the amount of tokens corresponding to their first year working at Kleros.

Coopérative Kleros has an allocation of 120,000,000 PNK which are mostly used for the payment of bounties, marketing activities and to provide liquidity in exchanges. 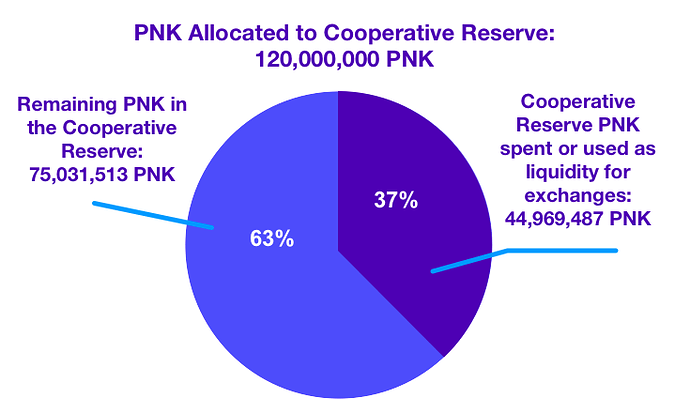 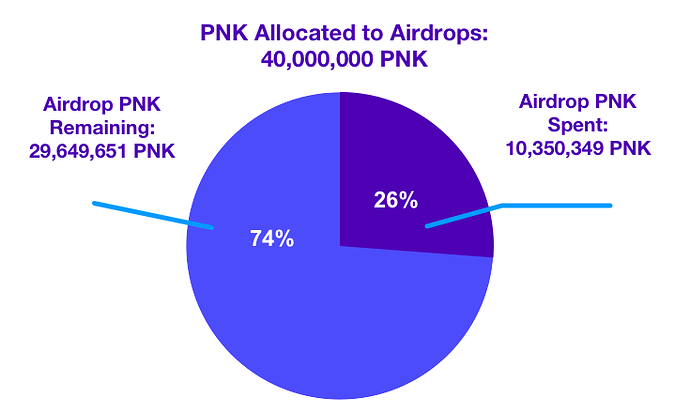 Due to some people expressing concerns about the proposal. We gathered some community feedback and alternative proposals. It was proposed to:

After gathering alternative proposals. We ran two polls about the proposal to evaluate community feeling about them. 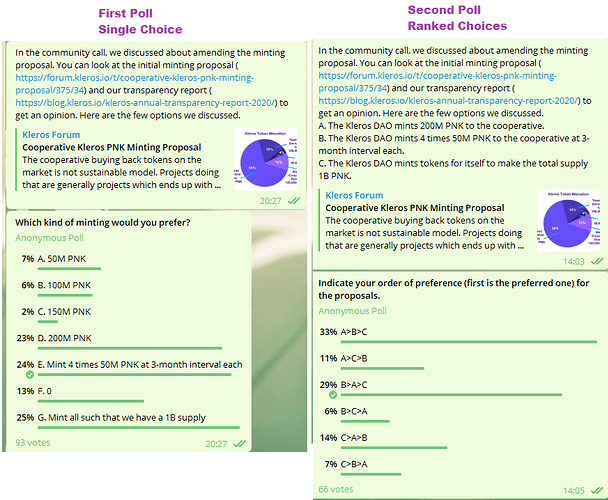 The first poll indicated that only a minority (13%) were against of the minting of tokens according to the 2017 plan. And that most people supported the minting of 200M PNK, in one time, in 4 times or to mint the whole 1B PNK at once.

To find a consensual proposal, we ran a second poll asking people to rank (see Condorcet methods) the proposals which were on top of the first poll.
We found that proposal A. “The Kleros DAO mints 200M PNK to the cooperative.” (initial proposal) was the consensus proposal (according to the poll, the final decision is to be made by the Kleros, the polls are just there for us to get early feedback) at it would won all its duels against other proposal:
A VS B: 58% for A.
A VS C: 73% for A.
Therefore it seems that the initial proposal is the most consensual and the one we will submit to vote first.

This proposal has been put to vote.