I propose to create a number of new courts on the xDai version of Kleros for use with Feature (but it can be used for any kind of IT freelancing platform). 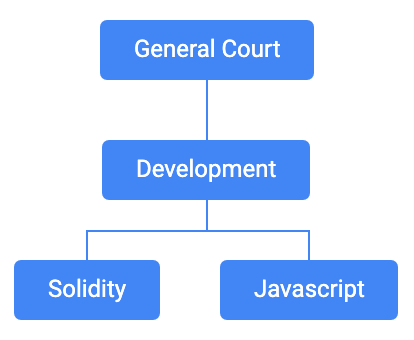 Namely, I propose to create the following xDai courts with the listed parameters:

In this court, jurors will solve disputes involving the respect of specifications given by the client.

This court requires a good level of programmation. Jurors who are not intermediate developers are advised to stake into this court only if they have some basics of low-level programming languages, ​​algorithmic and knowledge of good practices of development.

Developper does not respect indentation, does not name variables explicitly or has not made a clear file structure. In such cases, jurors should refuse the proposal made by the developer.

This court requires a good level of solidity. Jurors who are not solidity intermediate developers are advised to stake into this court only if they also know how to make relatively simple contracts, know the main solidity hacks and can compute the complexity of simple functions.

This court requires a good level of javascript. Jurors who are not javascript intermediate developers are advised to stake into this court only if they know the main frameworks/libraries (ExpressJs, React, EthersJs…) and be comfortable with testing, APIs or languages to interact with databases.

Changes to alpha, minstakes and juror fees of child courts following feedbacks from @William and @clesaege.

Interesting. One small point on the proposal: minstakes need to be monotonically non-decreasing as you go down a branch of the court tree, as someone who stakes in a court is also staked in its parent court. So if the xDai Development court has a minstake of 1400 PNK, then the other two child courts need to have at least that large of a minstake. If you want to keep the amount of locked PNK per vote the same, you can adjust the alphas accordingly. For example you could have minstake 1400 PNK, alpha .5 for xDai Development, and then minstake 1400 PNK, alpha .16 for xDai Solidity and xDai Javascript.

Having courts to resolve development disputes seems good but the proposed juror fees seems really low. As a software engineer I can’t see myself allocating the time and effort of reading specifications then reviewing code for 22/25 xDai.

For an European or an American these prices are not interesting but it’s not necessarily the case for developers from Egypt or Morocco where these services are much lower. See Offshore Developers.

Since on Kleros, there is more a lack of disputes than jurors, it is more interesting to give the low range of arbitration fees so that these fees are not a limiting point to use Kleros as arbitrator.

Thanks! Feature is currently in beta version and free for open-source projects

Having courts to resolve development disputes seems good but the proposed juror fees seems really low. As a software engineer I can’t see myself allocating the time and effort of reading specifications then reviewing code for 22/25 xDai.

I agree that 22 DAI seems pretty low to solve a software dispute. I think a reasonable amount would be 50 DAI. The dapp using it could start with only 1 juror if cost is a concern.

3 arguments in favor of a relatively low fee :

Afterwards, we can iterate to increase the fees if necessary.

Can we “split” the difference with 30DAI ?

We can try with 30 DAI, but in this case I would remove the word “senior” from the skill description.

Ok let’s try this set up!

The proposal has been put to vote .

Voted against not because of the general idea of the proposal but because feedback was ignored ($30 minimum + no mention of senior).

Yes indeed there was an error when submitting to Snapshot.

The proposal has been withdrawn.

Here is a google document with the version that will be submitted vote, feel free to check it by leaving comments if needed: KIP Snaphshot Developement Courts .

The updated proposal has been put to vote .

Here is a proposal for the Court Policy and the primary document for Feature:

This court serves to arbitrate development disputes. This can include:

This document details the acceptance criteria of claims submitted to challenge the source code provided by a developer to complete a task.

Ensuring claims who prove that the developer did not follow good development practices or the specifications described by the client.

The jurors are expected to refer to the specificities of each individual cover policy which can be detailed in a README.md, CONTRIBUTING.md, POLICY.md or a specific document included in the specifications. This document is valid only if it was edited before the job was created. In the case of widely used versioning software such as Github, Gitlab or Bitbucket, the date of issue is sufficient evidence to timestamp the document.

In case of any discrepancy between a specific cover policy and this general claims acceptance policy, the specific policy should be considered as the source of truth.

The grounds on which a challenge claim is valid are:

First of all, the specifications must be detailed enough for us to know whether the developer has completed the task or not. If they are not, the jurors are invited to refuse to vote.

The developer shall provide, if not previously described, the means to functionally test the code.

In general, the developer must comply with the implicit rules described by the source code as long as it is consistent and respects recognised conventions and standards.

Failure to comply with one or more of these rules is not enough to make a challenge claim. At the very least, more than 5% of the code should not respect these good practices.

Ideally, a linter will explicitly describe the rules of the style code as an Eslint or JSCS file for example.

If a formatter has been set up, such as Prettier for example, it will be the responsibility of the developer to run it to format the code within the defined rules.

Indentation is usually 2 spaces for javascript but sometimes it can be 4 spaces or a tab. The important thing is that it is consistent and respects the indentation of the blocks.

The use of a semicolon to close a statement is optional, depending on the project. The important thing is that this rule is consistent throughout the code.

Use one space before the opening bracket.

Identifier names (variables and functions) must use the camelCase naming convention exception made to global constants in UPPERCASE.

Preference should be given to explicit variable names that describe their purpose, avoiding acronyms, generic names and abbreviations that sometimes cause confusion.

Files names must use the naming convention kebab-case or camelCase exception made to component files sometimes in PascalCase or special files like README.md.

Code comments are not required unless there is complex code that needs to be explained so that it does not take too long to understand.

Several designs are possible like folders-by-feature, atomic or specific to a framework, the important thing is to have a coherent and consistent structure.

The choice of tools and their orchestration must be made according to the need, for example it would be a mistake to opt for a relational database in a Big Data project with a significant need for data storage.

The architecture must be simple and avoid being overloaded by non-essential services to meet the specificities.

Seeking to optimize performance does not mean that this optimization is detrimental to the readability and maintenance of the code unless it is specified in the specifications that seeking performance is essential.

The ideal is to try to make simple code and avoid any form of over-engineering.

Writing tests for new features is not necessary unless explicitly requested in the specifications.

They should at least cover passing cases if they are required.

Avoid unnecessarily adding packages for pieces of code that can simply be written or retrieved so as not to affect the performance, the maintenance and the security of the application.

Here is the basic workflow for contributing:

It will also be necessary if possible to have a clear Git history with short and well named commits (see conventional commits).

You can also comment directly on the google document: https://docs.google.com/document/d/14qWb4sQpvA-NPJEnqHIJu8LmrJeMt7uynt9JqQz2qGg/edit#

This proposal is definitely useful for the ecosystem!

Would it be possible to execute the transaction?

Maa goddess mother of everything, loves everyone