Using doges on trial to make my own cat list

I might get that pilot wrong, but if I do understand correctly you want to proof that the dog list can be protected from cat pictures due your jurors system.

If we compare this pilot to the physical world. For example currating such a “dog only” list, the participants would examine each picture to be safe that the picture does not contain anything invalid. Befor a picture gets accepted, you have multiple possibilities to check the picture, to decide if you want to challange it. E.g. flip the picture to check the background, check the carrier material of the image, hold it against the light to make sure nothing is behind and so on… The jurors later, do also want to do these measurements to make sure they only approve valid doges in the list and use all these information for their dispute. So in a digital space, beside the visual approve, we would also need to check more informations to be sure that what we approve is valid and only contains a doge.

Isnt a currated list quite pointless, if a sub group could easily abuse the list by setting their own rules and listing their own content? And this beeing possible without bribing or cheating the system. They just would conceal their content with a doge picture. This way the picture will fullfill the “human” eye rule, since they always will see doges. But what we see is only “the visual” transport layer. It’s a means to an end.

If they dont dig deeper and check all the data, the system can be abused and bypass the challangers/jurors dispute. For example, a submitter might start with an innocuous image file of a doge and adjust the color of every hundredth pixel to correspond to a letter in the alphabet. The change is so subtle that someone who is not specifically looking for it is unlikely to notice the change. And the “doge only” rule is bypassed. The only way of defeating this threat is to transform data in a way that destroys any hidden messages. So the system must make sure that what the human challangers/jurors see, is not only a transport layer (which could include more information). This could be achieved by adding a process called “Content Threat Removal”, e.g. here by processing the upload.

By offering such a system you need to make sure that what the jurors see, is not manipulated in a way. So the dispute is not only on the transport layer, but also on the content layer. What you dont want is that a innocuous image file could get accepted that includes illegal content. In this case “no cats allowed” on the list.

On the current list, accepted doges already got abused as transport layers by a potential sub group abusing the list. 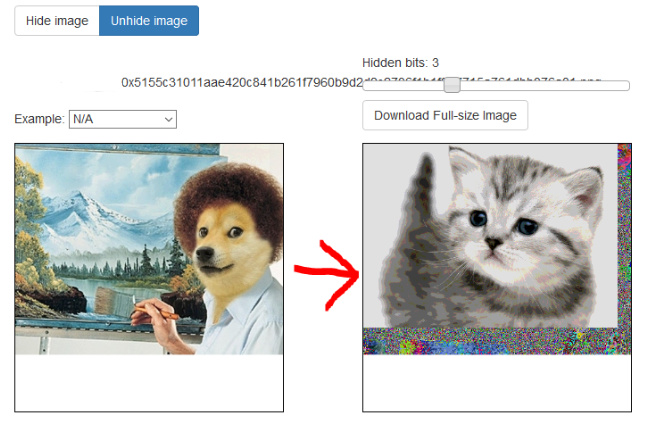