Discussion: limiting the max number of appeals to avoid bleed 🩸 war of attrition

What should happen unclear 51/49 swing cases? Appeal till you bleed

or maybe there is a better way?

As always thinking about enhancements, proposals, ideas. I’m keen to share my view and listen to your feedback.

I’m not expecting much support from this proposal. Nevertheless, I still believe it is worth it. Anyone can fork Kleros and implement their own parameters

It still remains football, regardless small variations here or there.

Similar analogy applies to Kleros, can tweak some parameters and it will remain Kleros: https://t.me/kleros/72125

Parties in agreement: If there are no controversies, no dispute - the case does not go to arbitration, it doesn’t touch Kleros.

Jurors in agreement: If there are some controversies, the evidence should help jurors vote. If the case is 3-0 or 7-0 or anything other one-sided - it is simple, easy win.

Jurors not in agreement: blast from the past Robotina logo.

For me it was “NO” but I can easily imagine another highly disputable case, that can go one way or another.

Current screenshot: https://imgur.com/a/pixbpxP (4 yes, 4 no, the remainder is pending, would be too many colors in this forum)

There can be cases with no clear consensus, where no amount of additional jurors or evidence that will make everyone agree.

There can be cases with emotional, spiritual, honor aspect where “money is not an issue” and dispute will continue until one party

To have a limit of max 7 rounds of appeal can gives peace of mind, the worst case scenario is “it will cost us 100 ETH”

Crowdfunding 51/49 is a risky strategy. There is dozen of other potential reasons why case might not get crowdfunding. See also this thread: Proposal: Kleros Cooperative Coommunity Fund (KCCF) DAO and funding the appeals

You cannot go further than couple of steps:

Similarly, at Kleros we can also limit the max 7 rounds.

What if no 2/3 majority is reached and the case is still swinging?

Coin flip, with the probabilities adjusted towards the jurors ratio in the final round.

If no agreement is made after the final round, before the coin flip?
a) both parties can agree to withdraw?
b) either of the parties can withdraw?

Ability to withdraw (assuming mutual agreement):
c) at any stage
d) only at the final when no 2/3 majority is reached

Withdraw. Reassess. Provide a better solution. It may happen that during arbitration one or both parties realise that Kleros is NOT the best way moving forward.

Juror incentives - Reward distribution - OK to be not be fully sure?

Until recently it was all about coherence, Shelling Point, jurors voting like majority were rewarded.

I can totally imagine situation with not enough information, not enough clarity, parties being unhelpful with providing evidence, or maybe spam attack and fake news.

Jurors who are are unable to make decision with full confidence should be allowed to vote “0” without penalty.

In the current system “0” are penalised, their stake being lost no matter what.

It has some advantages:

(more incentive to vote towards what they feel / perceive / think is fair, as opposed to what they think others will vote)

(definition of “fair” - I suggest best interest of humanity, society, justice as opposed to crypto term “coherence” or “Shelling point” - these still to be used but with the emphasis on fairness)

It has some disadvantages too:

PS. Initially, I wrote this post assuming max 5 rounds of voting. We can find a middle ground with max 6 but the principle remains the same. Avoiding bleed

I don’t agree all of it but I agree some cases require vote 0, unclear. It let’s parties to withdraw from the case. And I agree that withdrawal offer to opposing party would be public benefit. Good post.

To incentivize vote 0, we could give locked tokens back to voter even if it was not coherent if they voted 0. So ny voting 0, juror knows that he/she won’t lose anything and maybe win some tokens.

Thank you Ferit, I admit original post contains a lot of disputable, controversial statements. I’m unsure too, I just wanted to initiate a meaningful discussion.

Some lessons learned - next time I’ll keep one proposal per post, so that it is possible to keep the conversation focused.

On the front end, as I understand, if you get to the max round the appeal button will still be there, but the fees will be unpayable.

Logic to allow settlements would certainly be useful. It is somewhat complicated by the fact that we let third parties/jurors appeal (so that for example a juror who thinks she was on the wrong side of an initial round mistaken decision can prompt a review to the right decision), but in an escrow case allowing the two parties to split whatever was initially at stake via a settlement and leave (even if third parties are still fighting about the dispute) would be a good functionality.

Requiring 2/3 supermajorities is not a good idea in my opinion as it reduces the threshold for 51% attacks.

Can you explain the 2/3 supermajority and 51% attack treshhold?

Well, going to some kind of (weighted) coin flip (if I understood your proposal correctly) if you don’t have a 2/3 juror majority by the last round opens up the door for an attacker with 34% to be able to force you to a coin flip. If the value at stake is high enough that could be a viable attack.

I can see an argument for preventing appeals beyond a certain point if the previous round was super decisive - e.g. If the round of 255 voted 2/3 for A there is little chance that the round of 511 (which essentially draws from the same population) is going to vote at least 1/2 for B based on the random fluctuations one would expect based on which jurors were selected. Having that extra appeal still adds some bribe resistance, as an attacker would a priori have to offer large bribes in both rounds, but it does make an attack by a whale appealing frivolously more viable. So there is a tradeoff there.

The 2/3 treshold and “0” unclear reminds me the burden of proof situation - https://www.versustexas.com/criminal/beyond-reasonable-doubt/ - note Ross Ulbricht serves 2x life with no parole, he was convicted “beyond a reasonable doubt” 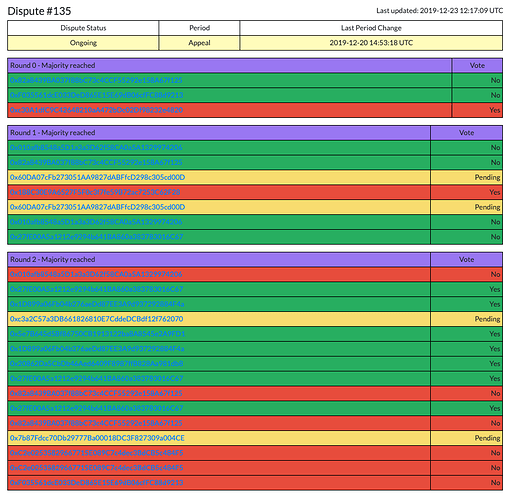