Philosophical discussion about "code is the law" VS best interest of the justice and humanity?

Many interesting discussions happen on Slack and Telegram.

I think there are some valid points here, happy to initiate a discussion.

When I was voting (2-3 times in total) I was concerned about being coherent with other jurors.
As a juror, my incentives were to vote coherently.
In fact, I couldn’t care less if the logo has enough pixels.
I was perfectly rational participant in game-theory experiment.

Leaning towards transparency, full information. As the information is public anyway: https://en.wikipedia.org/wiki/United_States_diplomatic_cables_leak

Their reasoning, according to Glenn Greenwald in Salon , was that government intelligence agencies were able to find and read the files, while ordinary people-including journalists, whistleblowers, and those directly affected-were not. WikiLeaks took the view that sources could better protect themselves if the information were equally available.

While I would prefer jurors to make decision independently, what is in the best interest in the justice, society, fundamental human values…
As a self-proclaimed “bug in the system” I am likely to vote coherently with other jurors
(rational game theory incentives)

Code is the law?

Best interest of the public, society, justice
I still don’t know the answer, it’s one of the greatest philosophical debates of our generation…

Currently emphasis is on game-theory, voting coherently, shelling point, coherence reward.
(this is what blockchain can understand)
And yet, there is a human element, it can happen that the resulting judgment would be unfrair or even catastrophic: https://www.wired.com/2010/12/ff-collarbomb/
• Jurors voted coherently - bomb exploded.
• The interest of the public, justice, humanity - bomb not exploding.

Imagine the dispute was governance related where most people wanted to vote for an option that would completely change tokenomics or so. It could end up in the same form.

PKI (public key infrastructure) is broken, privacy and security is gone… As a researcher shall I publish and obtain citations?

1 Like
Weighting votes "beyond reasonable doubt" - because sometimes a juror might be genuinely not sure... 🤷‍♀️
Feature request - ability to mark evidence as "fake news"
marsrobertson August 2, 2019, 2:49pm #2

I believe that this post could be split into a few parts.

It’s deep, complicated, difficult and I have no idea what is the right way. 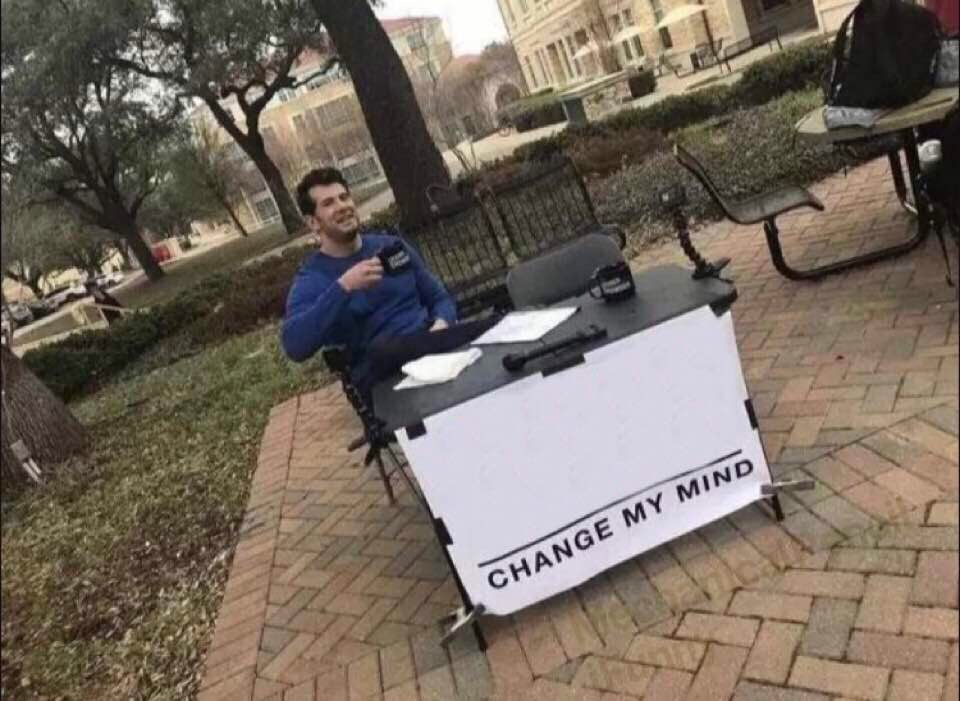 I can imagine a scenario when a juror has some little known piece of expert information.

In a perfect world it should be possible for that juror to submit evidence and shout from the rooftops: “here is super duper evidence, it changes everything, look at it”

But in a reality, there is fake news media propaganda, many factors matter, including the presentation of the evidence. In this example: this juror is an expert but has only Comic Sans installed on their computing device, no one takes him seriously.

That juror may also find a dilemma:

That leads to various voting strategies. I as a juror (2-3 times, real-life situation) couldn’t care less about the pixelated or blurry background, I wanted to have more crypto.

I think Shelling Point will have to stay. Blockchain has no way of knowing what is true.

I want jurors to consider what is fair, not just coherent.

Aiming for coherency will get us: https://en.wikipedia.org/wiki/Keynesian_beauty_contest

Example: a guy was caught red-handed, hands with blood, murder was just before midnight.

(some strange things happened, this is just an example)

True: according to the law from 1929 it was the date of the crime, not date of captured by the police.

Best interest of the humanity, society, justice is to charge the guy anyway, even if according to the law it not true.

Another example could be single mum smoking weed when kids went to sleep. Depending on the jurisdiction, it could be the death penalty.

"Code is the law" or fairness (definition subject to discussion) should prevail?

The trolley problem is a thought experiment in ethics. It is generally considered to represent a classic clash between two schools of moral thought, utilitarianism and deontological ethics. The general form of the problem is this: You see a runaway trolley moving toward five tied-up (or otherwise incapacitated) people lying on the main track. You are standing next to a lever that controls a switch. If you pull the lever, the trolley will be redirected onto a side track, and the five people on th...

Arbiter has an option:

Do we still aim for coherency, Shelling Point? Where (if at all) do we aim for fairness, moral and ethical standards?

Kleros should establish a working relationship with https://cueims.soc.srcf.net/

My head is already exploding and I have more attainable goals to accomplish near-term, I’ll probably leave it here.

We have seen many examples in society where mathematicians have used their skills and training to inflict harm. Historically, the Manhattan Project is one of the most highly-debated cases of technological development, and it involved several of the finest mathematical minds of the time.
The diesel-gate scandal at Volkswagen, where cars were fitted with ingenious cheat devices to circumvent emissions tests, is another more recent example.
And less than a year ago, several operating system exploits developed by the NSA (such as EternalBlue) entered the public domain, where they were quickly used to develop crippling malware like WannaCry. Such examples are numerous, and have become more and more common in recent times.

Discussion: limiting the max number of appeals to avoid bleed 🩸 war of attrition
Weighting votes "beyond reasonable doubt" - because sometimes a juror might be genuinely not sure... 🤷‍♀️
clesaege August 2, 2019, 4:21pm #3

That’s a quite interesting debate.
I think the main goal of Kleros is to allow parties to contract with predictability:

In all those cases, the fair outcome is the predictable one, so ruling on those is easy.

Should we just enforce the contracts as they are written? Probably not, otherwise someone would end up using Kleros for an automated assassination market and we probably don’t want that to happen. This would definitely not be fair.

If you do nothing, your vote is not taken into account, if no one votes, the default result is refuse to arbitrate. It should always be better to vote than not to so let’s remove the last option to simplify things.
Let’s take a look at the general court policy:

In this case, ruling 1 and 2 would lead to murder, which is immoral, so according to the court policy, you should vote 0: refuse to arbitrate.
This is the predictable outcome. Note that the policy does not prevent people to vote for options leading to immoral outcomes, it mandates to vote 0.

Is it also the fair one?
It may not be obvious at first sign, as we could think that the fair outcome would be the one that leads to lowest suffering. And 0 immediately leads to 2 deaths instead of 1. But we should look at the long term effects.
If the arbitrator cede to this blackmail and effectively votes 1 or 2, there would be only 1 death in this ruling. But then the blackmailer would have a satisfactory ruling and could continue to use Kleros to decide who to kill. Even worse, other malicious people could see Kleros as nice tool for it and use Kleros to kill more people. Moreover, all the protection about immoral uses could be rendered useless, as malicious people could then just make 0: refuse to arbitrate worse than other outcomes to force jurors to vote.
So voting 0 would also be the fair outcome as it would minimize the amount of suffering on the long term.

If we start from the premise that jurors aim for consensus, then fairness may get in the way of consensus because different jurors will have different views of what is fair in a given situation. And my understanding is that currently there is no way of knowing where a juror stands on fairness when they put themselves forward as a potential juror.

So I would say that if you want to put fairness into the equation you would need to have a way of give an early steer to jurors as to what Kleros considers is fair.

Does this make sense?

If we start from the premise that jurors aim for consensus, then fairness may get in the way of consensus because different jurors will have different views of what is fair in a given situation.

That’s why I suggested optimizing for the best interest of humanity, humanity is more encompassing that just a single culture.

I am genuinely worried that incentivizing and putting emphasis on coherence can lead to https://en.wikipedia.org/wiki/Keynesian_beauty_contest

As a juror I’m not thinking about what is fair, what is just, what is the best outcome, only what is coherent and coherent is not always good.

(it’s a long, deep, philosophical discussion and we will see in the future some real use cases)

You are raising an important and fundamental point when you say that coherence is not optimal as a dispute resolution goal and indeed in can lead to unfairness, especially as the complexity of disputes submitted to Kleros increases.

I just wonder if « best interests of humanity » as a benchmark (while it is of course right) might not be too high level and difficult to apply for commercial disputes. If we look at the gas price disputes that are posited as a future field for Kleros in the Dispute Revolution book, it may be hard for jurors to see where the best interests of humanity lie when deciding between competing has price formulae?

I have checked the book: https://ipfs.kleros.io/ipfs/QmZeV32S2VoyUnqJsRRCh75F1fP2AeomVq2Ury2fTt9V4z/Dispute-Resolution-Kleros.pdf

I have read the gas price chapter.

The Kleros platform’s reliance on cryptoeconomic solutions to ensure fair decisions guarantees that jurors will not only vote according to their own subjective values and priorities, but will also consider the perspectives of their peers due to the Schelling point principle. Given the high monetary value of gas price review disputes (ranging from hundreds of millions to billions of dollars), the jurors could be required to stake a sufficiently high amount of PNK to ensure that they have more ‘skin in the game’ and do not vote carelessly.

I do not know if that is desirable.

Hypothetical dillema of a juror:

I personally believe that YES is the right, correct, just, fair answer.

I think that under the hood (smart contract implementation) it will be Shelling point - the majority - that will be rewarded. It will the user interface, front end, HTML CSS JavaScript prompting jurors to decide that is right, correct, just, fair, not just coherent. 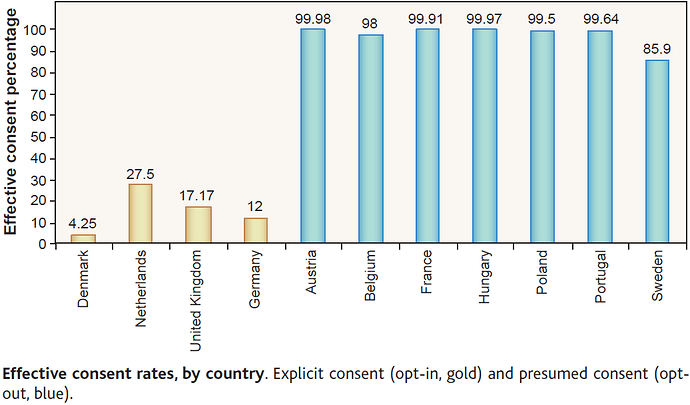 Change in wording, change in defaults, so much different outcomes.

Fair, reasonable, predictable, acceptable verdicts are in the best interest of the justice.

I can imagine situation where there is some contract between UK government and Russia gas company. Maybe it would be in the interest of UK society to cancel, but the Russia society would lose, also the justice element will lose, so no frivolous cancelling just because a clause provides loads of benefits to one side.

You are spot on in flagging this dilemma. This is what I see as the hurdle standing in the way of Kleros taking on the non- binary, more complex disputes. Any scaling up of the current model must factor in an applicable notion of fairness. I wonder if the fairness component can be applied on a pure Schelling point -based system or if fairness means scaling back Schelling to an extent to allow for the sustainabilty of Kleros in future.

Looking for a specific example… Keep them coming! 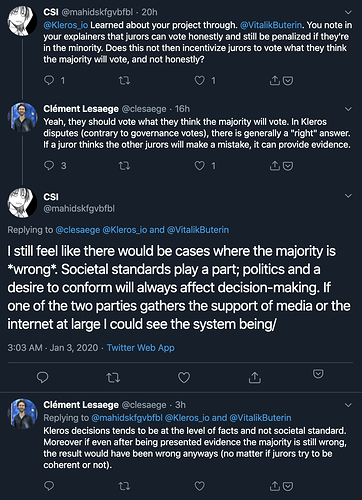